General Overseer of the Redeemed Christian Church of God (RCCG), Pastor Enoch Adeboye, has assured that the late ex-beauty queen, Ibidun Ighodalo, is in a “better place”.

Adeboye tweeted this on Thursday morning in reaction to Ibidun’s death on Sunday.

He described the news of the former Face of Lux as “really saddening”.

“Hearing the news of @ibidunni_ighodalo’s demise was really saddening but I know that she is in a better place right now. I pray that the Almighty himself will comfort the family of @pastorituahighodalo in Jesus name,” he wrote.

Hearing the news of @ibidunni_ighodalo ‘s demise was really saddening but I know that she is in a better place right now. I pray that the Almighty himself will comfort the family of @pastorituahighodalo in Jesus name. 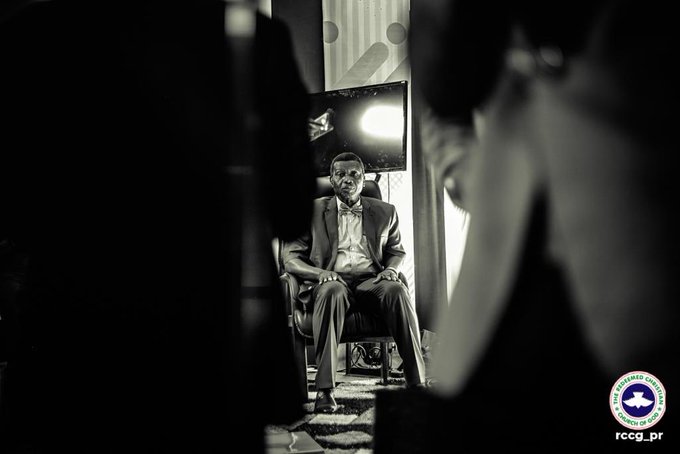 Hushpuppi has a case to answer- EFCC

The Commission is familiar with grisly details of his money laundering transactions, involving many high-profile cyber criminals facing trial in Nigeria.

The Commission is engaging with the FBI in tracing victims of his fraudulent transactions and other fraudsters having direct involvement with him.
Local cyber criminals with money laundering networks with him, are also being investigated.

Hushpuppi was arrested on Wednesday, June 10, 2020 in United Arab Emirates in connection with $35 million ventilator scam.

The Serie A has resumed and DStv and GOtv will broadcast games featuring Inter Milan and Atalanta, both teams fighting to clinch a UEFA Champions League spot, live to football fans this weekend on SuperSport.

The league’s first game is on Saturday as Torino welcome Parma to Turin’s Olympic Stadium. The game will kick-off at 6:30pm and will be broadcast live on SuperSport 9 and SuperSport Select 5. Torino will be desperate to break a six-game losing streak which has seen them slip down the relegation zone. Parma will, however, look to Ivorian star Gervinho for inspiration as they seek to climb from ninth place and challenge for a spot in Europe next season.

Also on Saturday, Hellas Verona will play host to Cagliari at Stadio Marc’Antonio Bentegodi. The match will air live at 8:45pm on SuperSport 9 and SuperSport Select 5. Torino won just once in their last five Serie A matches before the break, but that’s plenty better than Cagliari, who are yet to taste victory in a match in any competition in 2020.

On Sunday, Atalanta host Sassuolo at the Gewiss Stadium in Bergamo. The match will be broadcast live at 6:30pm on SuperSport 9 and SuperSport Select 2 and 5. Atalanta have been one of the most entertaining team in Serie A this season, and manager Gian Piero Gasperini will be hoping his team can pick up where they left off back in March.

The biggest game of the weekend sees Inter Milan host Sampdoria at the San Siro on Sunday. The match kicks off at 8:45pm and will be broadcast on SuperSport 9 and SuperSport Select 5. Inter’s bid to win the league title has taken a nosedive, though victory in this game in hand will bring them back to within six points of table toppers, Juventus.

There is also action from the Premier League, as Tottenham Hotspur hosts Manchester United. The match will be aired live on Friday at 8:15pm on SuperSport 3 to DStv subscribers. Both teams are looking to get themselves back into contention for a place in next season’s UEFA Champions League, and this head-to-head battle could go a long way in deciding their fate.

t is Merseyside derby this weekend as Everton play host to champions-elect, Liverpool at Goodison Park. The match will be aired live on Sunday at 7pm on SuperSport 3. This derby sees the return to action of league leaders Liverpool, as they look to move to within a touching distance of their first title in 30 years. It will also give African football fans the chance to see some of the continent’s top players in action, including Sadio Mane, Mohamed Salah and Alex Iwobi amongst others.

The top match from La Liga this weekend is the meeting of Sevilla and Barcelona from Estadio Ramon Sanchez Pizjuan on Friday. It airs live at 9pm on SuperSport 7 to DStv subscribers, and SuperSport Select 2 and 5 to GOtv subscribers. The teams’ last meeting on October 2019 brought an impressive 4-0 home win for Barca – with Luis Suarez, Arturo Vidal, Ousmane Dembele and Lionel Messi all netting.

However, Los Nervionenses will be determined to claim revenge on home soil as the team, led by former Spain manager Julen Lopetegui, push for a place in next season’s UEFA Champions League.

For more details on these games and other fixtures, visit www.dstv.com and www.gotvafrica.com or download MyDStvApp and MyGOtvApp to subscribe or upgrade, and join in on the excitement. And while you’re on the move, you can stream matches on DStv Now.

epa07878032 Sassuolo’s Alfred Duncan (L) and Atalanta’s Andrea Masiello in action during the Italian Serie A soccer match US Sassuolo vs Atalanta BC at the Mapei Stadium in Reggio Emilia, Italy, 28 September 2019. EPA/ELISABETTA BARACCHI

8 Drama-Filled Telenovelas on GOtv That Will Keep You Longing for More!

We all know Telenovelas leave us expressing all the emotions available to mankind….and that’s what we absolutely love about them! So, if you are a fan of unexpected plot twists and tear-jerking moments, then this list below is for you.

Spoiler Alert! Most of programmes have details about the next episodes.

Follow GOtv on Twitter, Instagram and Facebook for more quality programmes in June. Visit www.gotvafrica.com or download the MyGOtv app from the iOS and Android store to find out more and for self-service options. You can also pay for your GOtv subscription using – USSD CODE (*288#), PAGA, Quickteller, Automated Teller Machines and Bank Apps. The GOtv toll lines; Etisalat (09085330333), MTN (08139842260), Airtel (07080630900) & GLO (08117930333) are also available to speak with customer service representatives.

Contrary to his widely publicised promise to engage stakeholders critical of its recently released code, the National Broadcasting Commission (NBC) announced a re-endorsement of the controversial regulation.

The re-endorsement was presented as a reconsideration of some of the amendments considered irksome by industry stakeholders.

The code, issued on 27 May, proposes sweeping amendments to how the industry will function when it takes effect. But the amendments provoked angry reactions from industry stakeholders, who were furious that the code was finalised without stakeholder consultation and accused the NBC of seeking to jeopardise investments as well as kill creativity in the industry via provisions to regulate exclusivity, mandate sub-licensing and control prices at which creators sell their content.

Prominent figures such as Jason Njoku, CEO IrokoTV, his wife, Remi, who heads ROK Studios, and Naz Onuzo, a movie producer, were stinging in their criticisms of the code.

Evidently stung by stakeholders’ complaints, the NBC, in a statement issued on Friday and signed by Ekanem Antia, Assistant Director, Public Affairs, said its board will meet this week and “smoothen the rough edges of the new amendments”. While thanking those who contributed to the new code, the NBC said it had become obvious that more voices need to be heard and that stakeholders who have ventilated their opinions be given adequate audience.

Yesterday (the first working day of the week) in Abuja, however, Dr Armstrong Idachaba, acting NBC Director-General, addressed a press conference where he re-endorsed the code. According to Idachaba, the loudest criticisms have been around Sections 6.2.8, which seeks to regulate exclusivity in sports broadcasting rights and 9.0.1, which compels right holders to any popular content to sub-license to other operators, including competitors.

Industry figures maintain that the NBC failed to ask for their input, simply ratified what it had finalised and argued that Section 9.0.1 and others remain in force.

“Nigeria is a democracy and democracy should permeate all spheres of our national life. Multi-stakeholder engagement is a key element of democracy. No such thing happened. The NBC has acted like Moses the lawgiver. It acted dishonestly by giving an impression that it was ready for engagement and doing something else,” said a movie producer, who prefers anonymity.

He explained that not one line of the code has been reconsidered or reworked and as such, it cannot be taken that NBC re-looked the code.

“Once it comes into effect, every provision will have teeth. Even production industry people who think they will not be affected will be shocked. The victim is always the last to know. They have changed the story to make it read like it is only exclusivity to sports that is being regulated. We can read; they are minded to regulate every programme genre,” he added.

Union Bank, one of Nigeria’s foremost financial institutions, has announced the release of its 2019 Citizenship, Sustainability, and Innovation (CSI) report – an annual report outlining the Bank’s social and environmental investments during the year in view. The report gives a detailed, year-long account of responsible business practices, innovation, and community impact.

The 2019 report was prepared in line with the Nigerian Sustainability Business Principles (NSBPs) and the Global Reporting Initiative (GRI) standards, highlighting Union Bank’s commitment to transparent reporting of its CSI efforts. The report also provides insight into the Bank’s commitment to making lives better for Nigerians by enabling success and championing development in Nigeria, in line with 14 out of the 17 Sustainable Development Goals (SDGs).

According to the report, in 2019, Union Bank achieved its plan to deepen its sense of shared ownership and accountability, leveraging the unique three-pillar model: Citizenship, Sustainability and Innovation. This model informed the Institution’s choice of partnerships, as the Bank continues to explore ways and opportunities to deepen engagement and ensure sustainable and scalable impact.

Speaking on the release of the report, the Chief Executive Officer, Emeka Emuwa, expressed his satisfaction at the contributions of the Bank as a leading financial institution committed to making lives better for Nigerians. He said:

“We have continued to make progress in embedding Citizenship, Sustainability, and Innovation into our operations as a Bank. Last year when I presented our scorecard, I highlighted that our focus for 2019 would be to deepen our sense of shared ownership and accountability. We have achieved this and more by making significant, and strategically aligned contributions aimed at enabling youth empowerment, social innovation, arts, and culture, and fostering a globally competitive economy.”

After more than a century in business, Union Bank has solidified its position as Nigeria’s most trusted financial partner, innovating in response to evolving customer needs and championing growth and development for all, especially those at the bottom of the pyramid.

A statement by his Chief Press Secretary, Gboyega Akosile, explained that the new board appointment of Adeduntan and others, which take immediate effect, were necessitated by the vacancies in the two organisations.

The Governor thanked the previous members of the two Boards for their meritorious and conscientious service to the State.

Sanwo-Olu also congratulated and thanked the new members for accepting to serve their State and help improve on the achievements of their predecessors.

Sanwo-Olu noted, that the new members were carefully chosen based on records of excellence in their chosen fields.

Membership of the LSETF board is four years.

The new boards’ compositions are as follows: